If I only could, I'd be running up that hill...

It's been a while since I last blogged and life has a habit of running away with you when you own a shop. Barely enough hours in the day to fit everything in let alone exercise, so a short walk in the day and a 3.5 mile walk in the evening with the pooch is as good as it gets.  That's enough to help keep Roxy's weight in check but sadly I have grown a bit of a muffin top, which would be fine if it was of the edible kind but a small lip above my waistline is in danger of completely hiding my belt and I'm a few pies/cakes/chocolates away from never seeing my feet again. So what to do? I'm hopeless at dieting, I love food too much to give it up. My other form of exercise, the mountain bike, has been cleaned and covered up ready for the day I can pluck up the courage to sell it, a new boiler purchase has somewhat thwarted my plans to get myself a new steed and the old ally mule has to go. Sob, Sniff.  Feeling inspired by all my friends who, over the past year, have taken it upon themselves to cycle, swim, run, dance, gym and take up martial arts, I decided to have a go at something that requires very little investment, running :-O

One night whilst out walking with Roxy, I had this sudden burst of energy and started running. I'm not sure whether it was the curry I had just eaten or the 'inner' Steve Cram inside me that had given me the fuel/encouragement to break out into a canter but there I was, running! It was like that scene from Forrest Gump sort of. I ran and ran and ran until I could no longer breathe and felt like I was going to see my curry again. Looking back at the lamppost I had used as a starting point just to see how far I had run, I was slightly disappointed at the distance I had covered.... I was so close to my starting point that I could actually lean against it whilst catching my breath :-/ Hmmmmmm  So feeling more like Steve 'Crap' than Steve Cram at the moment, I decided to walk until my heart beat had slowed down its 'Techno Rave' rhythm to a more sensible beat. In total I managed to walk/run/walk a total of 2.5 miles that night and had planned to do more of the same the following night but my ankles and shins had other ideas.


Waking up the next day with Lungs that had less air in them than a bag of Walkers Crisps, ankles that had been massaged by 'Miserys' Annie Wilkes' sledgehammer and shins that felt like they had more cracks that even Gavin from Autoglass couldn't cope with. Oh my goodness, how sore did I feel.  I decided to leave any form of running for a few days until my body had recovered from it's state of shock and just stick to walking with Roxy.

Last night I managed to get out for another trial and actually managed to run for longer between my walk/rests. I've noticed that my route is a slight incline before I hit the dreaded Arterberry Road Hill which feels like the equivalent of Mt Snowdon (on a smaller scale) to someone as unfit as myself. And I have also noticed just how bad my lung capacity is. I've never smoked, urrggghhh filthy habit, but have lived/worked with heavy smokers and previous occupations have seen me working in dusty environments and my years as a paint sprayer with nothing more than a mask that was the equivalent to just holding my hand over my mouth for protection could have something to do with my pensioners lungs. Excuses aside, I reckon my poor fitness is due to the complete lack of interest in physical exercise.... unless it's a cycle ride with a rucksack crammed full of 'goodies' or a gym with a well stocked vending machine/cafe.

I will continue with my slow progression and will post some updates, but for now I'll finish this blog with a few stats for you to have a giggle at and 1 goal.

Goal Is to run 1 complete mile without stopping for a burger. Its not a massive distance but I'm aiming low with something realistic to start with. 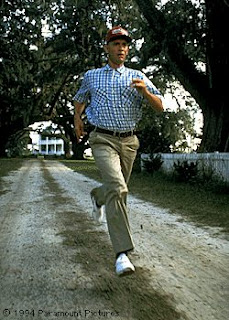 Steve Nicholas
6ft bald chap, on a never ending mission to find the perfect Steak. I like old school Rave music and a bit of Heavy Metal. Can often be found grazing on a... well, pretty much anything. The only time I'm not eating is when I'm sleeping (and even then I'm dreaming about food)